“Thank you all, doctors and staff, of the Root Cause Medical Center. I am indeed very grateful for the professional help and the guidance that you have provided. About 15 months ago I arrived at the center, just a few weeks short of my 54th birthday. What I brought with me was a list of complaints that were long and, even then, still growing. The gluten antibody tests were not conclusive in my case, but with the preponderance of symptoms that I was having, I was more than willing to commit to a gluten and dairy-free diet.

The health seminars which I attended at the center were also informative and extremely helpful: Over the past year, I have undoubtedly eaten healthier than during any other year of my life as an adult. I mean, who would have thought that people actually ate foods like raw broccoli on a daily basis?

Below I’ve listed many of the health issues that I had been facing for 25 years:

That’s how long my hips had been giving me trouble. Almost always there was discomfort, sometimes there was actual pain, but they were always problematic, especially when going up or downstairs. There were times when my hips hurt so bad that I could barely walk. It only took ten to eleven months of physical therapy and better nutrition to get’em fixed. I don’t even feel them anymore.

18 years: That’s about how long ago I began to realize that I was having problems with dairy products. After years of trying every brand of lactose enzymes, I concluded that I’d have to give up on milk products, though the answer to “How could this happen?” escaped me completely until I learned more about gluten intolerance from the Root Cause Medical Clinic seminars. I’m still eating dairy-free at this time, but who knows, maybe there’s a gluten-free cheese pizza in my future somewhere, waiting just for me…

15 years: That’s how long I’d been complaining to doctors about stomach and indigestion problems. I had tried every antacid and acid-blocking medicine available, both over-the-counter and prescription-strength acid blockers. At Root Cause Medical Clinic, it took less than a month to discover and zap the nasty little H. Pylori bugs, and the positive effects of clearing out the bacteria were almost immediate. I take DGL now for occasional stomach upset, but even at that, I’ve only needed the DGL two or three times in the past year. What an unbelievable difference this single improvement has made to my general disposition! Hypoglycemia started darting in and out as I began to eat more and more (bad) carbs. I don’t know how many pounds of chocolate or bottles of beer I went through in an average week, but both had become a substantial part of my diet. Cycles of “carb stuffing” (to satisfy my low blood sugar and my ever-complaining stomach) began to accelerate in frequency. Insomnia became the norm. Waking up more tired than when I went to bed, days often dragged on and on.

Somewhere during those fifteen years, I began to have the most ferocious migraine headaches. The “good ones” would just be a day or so, but the bad ones lasted for centuries. I didn’t know it at the time, but I had developed food intolerances to chocolate and citric acid, and at least one food preservative. Are there medals or awards for a fait accompli of having consumed 1/4 ton of chocolate in a ten year period? The good news is that I haven’t had a migraine, or any other kind of headache, in many months now.

When I arrived at Rooth Cause Medical Clinic I was started on an adrenal support supplement program. That program, in conjunction with pre-bedtime behavioral changes, helped immensely. Still, it took several months before I actually settled into a fairly normal sleep pattern. I get 7 1/2 hours of very good sleep every night now. and I can empathize with zombies now.

8 years: I had developed cysts on the palms of my hands and the bottom of my feet. Wearing leather shoes was out of the question. Tennis shoes had enough “give” such that the insoles would actually form around the cysts, so the cysts weren’t too bothersome. One of the cysts on my left palm had hardened, and it was a major source of irritation, depending on what I was doing. The cysts on my palms cleared up about 4 months into the gluten-free diet, and the cysts on my feet took another two months to disappear. My palms are still a little bit tender in places, but even that tenderness is almost gone now. Salute!

5 years: That’s about when the bad nightmares started (as if there is such a thing as a good nightmare); probably from malnutrition and low blood sugar. I won’t even tell you about the nightmares. I continue to take a fairly comprehensive array of nutritional supplements, and I’m oh so thankful that, like all of the other major problems that I was experiencing, the nightmares are long gone.

1-2 years: My overall digestion took a turn for the worse around that time-frame. My digestive process had gotten to the point where I could not eat anything containing fructose, including fresh fruit, without major gastrointestinal upset. The cause turned out to be a second ugly bug that had invaded my innards. The antibiotics that zapped the H. Pylori worked wonders on these bugs as well. After repopulating with probiotics for several weeks, my digestive system finally settled back to normal. Whew! Really!

6 months: Besides the problems that I was having with my hips, I was beginning to have problems with a number of other joints. In previous years I had sustained sports-related injuries to my left knee and left shoulder. My left arm began to feel as if it wanted to separate from the shoulder on its own. My left big toe would pop out of joint at times, just from walking. My left thumb would pop out of joint when I reached out to grab an object. The thumb pop didn’t bother me much, but the toe pop was somewhat painful. I don’t actually remember when the thumb and toes stopped being mean to me, but I seem to recall that I was about six to eight months into the gluten-free diet. My left shoulder is still something of a problem, although my arm no longer tries to separate from the shoulder. I now believe that this is a familial, genetic issue, as both of my brothers are also experiencing shoulder problems. My left knee is now about 90-95% healed, which is a whole lot better than the 50% range when I arrived.

The Physical Therapy staff have been absolutely great, both in their applied therapy seasons and in teaching me how to attack the myriad physical problems that I was experiencing. For years there were other signs of things amiss in my body. For no apparent reason, my lower back would go out of whack two or three times a year, starting back in my 20′s. I used to see a single hive appear on my left arm, always in the same place. Twice I had been diagnosed with a skin disease called pityriasis rosea. Cold hands and freezing feet persisted during the winter months. But last winter I only had about three “cold days”, and I’m willing to bet that I’ll see more improvements this coming winter.

I know that gluten slipped into my diet several times during the first couple of months. I learned from those mistakes. It did take a few months to get my wife on board with the changes. I can’t blame her though since I had asked her to make many changes as I searched for “the cause” over the past years. Now my wife and oldest daughter will inform me directly if they’ve prepared food which is “Dad approved”. And that is pretty cool. Probably the most difficult aspect of trying to eat right was that it took close to eight months before the cravings for sweets and chocolate and the beer disappeared. After that, the diet became a whole lot easier to sustain. I still occasionally have salty cravings, but these two are almost gone.

Yep, I’m feeling pretty darned good these days. And I do want to say, once again, thank you all!!” 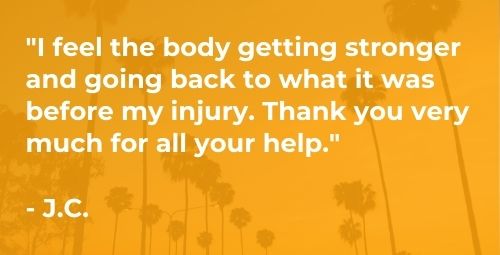 Patient feels body is getting stronger because of Chiropractic Adjustments 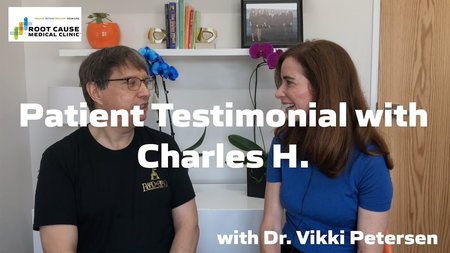 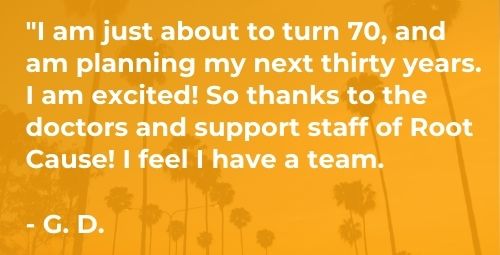 Root Cause Patient Looks Forward to the Next 30 Years of His Life!